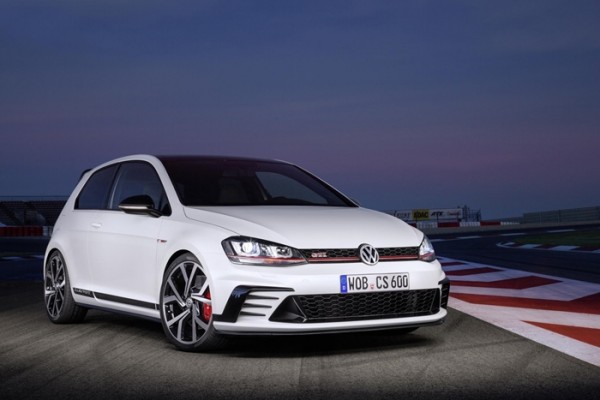 At the beginning of next year, the icon of the sporty compact class – the Golf GTI – is celebrating its 40th anniversary. Volkswagen will mark this historic event with a progressive special edition: the new Golf GTI Clubsport.

The inventor of the “GTI” is thus continuing the tradition of GTI anniversary models, as exclusive special editions also marked the 20th, 25th, 30th and 35th birthdays. The turbocharged direct-injection engine in the anniversary model delivers an output of 195 kW / 265 PS , 35 PS more than on the previous mostpowerful Golf GTI. That, however, is far from all. For a short time – approximately 10 seconds each time – the driver can increase engine power by an additional 10 per cent to over 290 PS using a boost function. This added power is activated simply by kicking down the accelerator.

The Golf GTI Clubsport sprints to 100 km/h in 6.0 seconds with a 6-speed manual gearbox; the optional 6-speed dual-clutch gearbox (DSG) is even faster at 5.9 seconds.The Golf GTI Clubsport has a top speed of 250 km/h (DSG: 249 km/h). A look at fuel economy shows just how efficiently the sports car converts engine power into propulsion. With a manual gearbox, consumption is 6.9 l/100 km (equivalent to 160 g/km CO2); if power is transferred to the front wheels by DSG, the figure comes in at 6.7 l/100 km (155 g/km CO2). 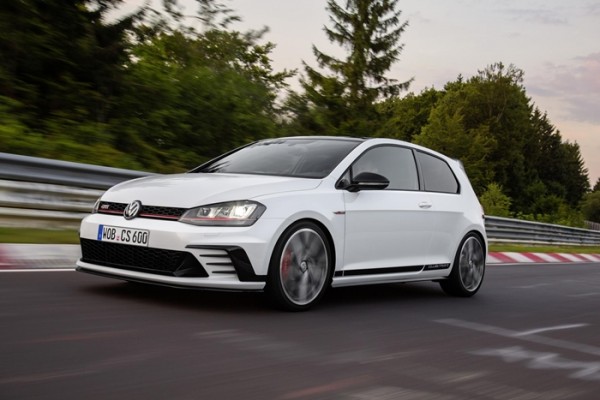 Not only has Volkswagen given the anniversary model’s engine more power, it has also extensively revised the design, equipment and aerodynamic fine-tuning of the anniversary model. Due to the high power output and significantly improved downforce, the dynamic performance of the Golf GTI Clubsport propels it into the domain of top-class motorsport. This results in ground breaking handling properties at high speeds and breath taking cornering speeds.

The Golf GTI Clubsport is painted in “Oryx White” (other colours are available); as a contrast, the roof area comes in black. The Volkswagen exterior designers created a completely new front bumper, new side sills, a new rear diffuser, a new multi-part roof spoiler and exclusive forged alloy wheels for the anniversary model. These features immediately make the anniversary model standout from the familiar GTI models. 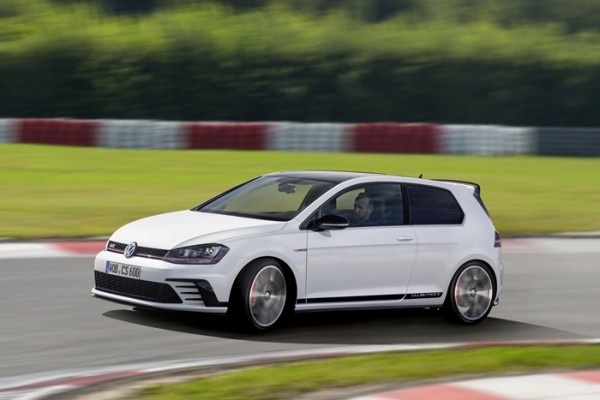 In terms of style, the side profile of the Golf GTI Clubsport is based on the original GTI version. To put this in context: the first generation was characterised by a wide black trim stripe on the side between the front and rear wheel arches at bumper level. This stripe has now been transferred to the side area ofthe anniversary model, paying homage to the 1976 Golf GTI, and is enhanced with the lettering “Clubsport”. The black trim stripe is continued towards the front in the new air deflector element of the front bumper. The optional “Bresica” 19-inch alloy wheels designed especially for the new Golf GTI Clubsport make a further dynamic statement. The anniversary model is equipped asstandard with forged 18-inch alloy wheels that are also newly designed. A fine detail on the side are the high-gloss black door mirror caps.

The redesigned roof edge spoiler, perfected in the wind tunnel, is much larger than its counter part on the current GTI. There is a narrow air gap between the roof area that is entirely in black and the wing-like spoiler placed above it. The roof spoiler in high-gloss black and “Oryx White” projects upwards above the roof line. The lower rear section has also been individualised. Seen diagonally from behind, it is noticeable that the line of the wrap-around splitter of the side line (below the sill) is continued in the large rear diffuser that is a new development. Here, too, the colour is high-glass black. The redesigned and chrome-plated tailpipes of the twin-pipe exhaust system have been elegantly integrated in the diffuser; the diameter of the tailpipes is much larger than on the familiar Golf GTI models. The LED rear lights come in dark black-red. 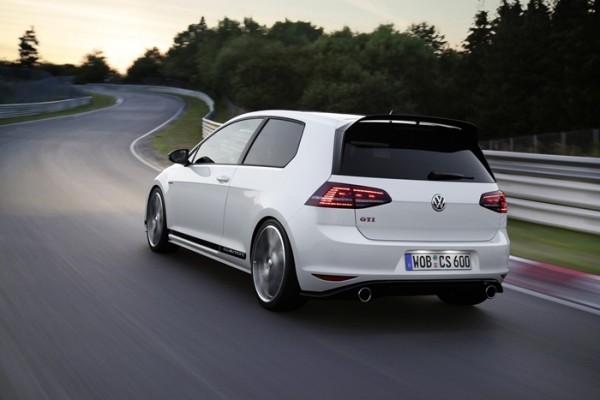 The interior features iconic details that are essential for every GTI; they include the ergonomic sports seats with a tailor-made look featuring tartan fabric upholstery, red topstitching, a gear knob in golf ball design and a black headliner. These insignia of sportiness have been individualised or modified for the Golf GTI Clubsport. Accordingly, the anniversary model features folding racing bucket seats instead of sport seats. The seats are partially covered with Alcantara and feature a honeycomb pattern in the area of the back rests and seat cushions; the backrest also incorporates “GTI” lettering. A red line enhances the seat belts. New trim strips in “Honeycomb 40” design (instrument strip, centre console and doors) give the interior an even more exclusive appearance. Sporty decorative features include Alcantara trim on the gear lever, new lenses on the gear knob, the Alcantara sport steering wheel (with GTI emblem, red seam and 12 o’clock marking) and customised floor mats with red edging. When the driver and front passenger open the doors, they see the exclusive stainless steel door sill plates with red GTI lettering. 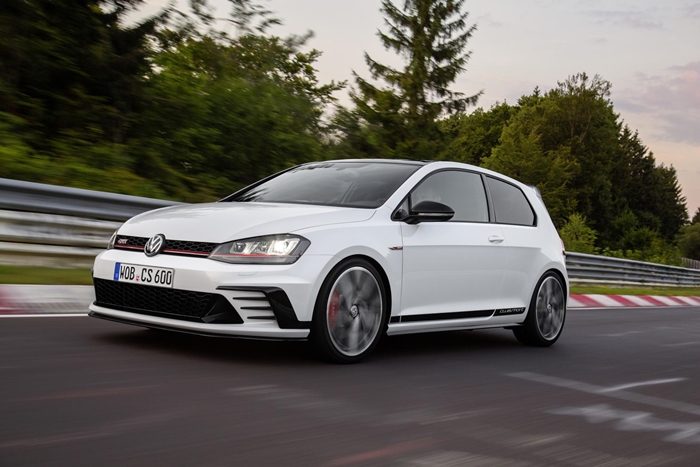 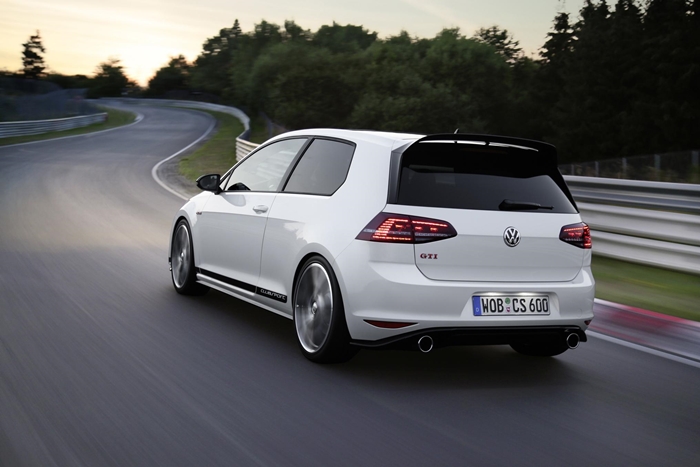 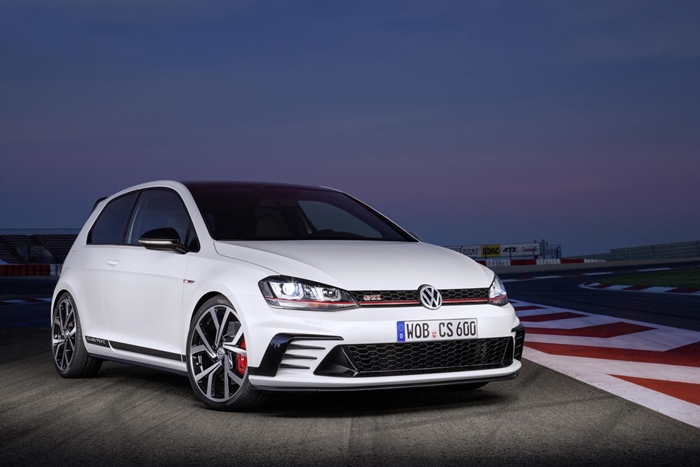 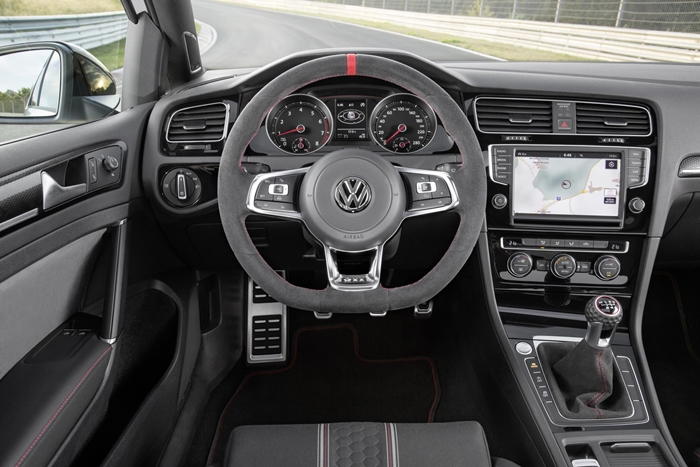 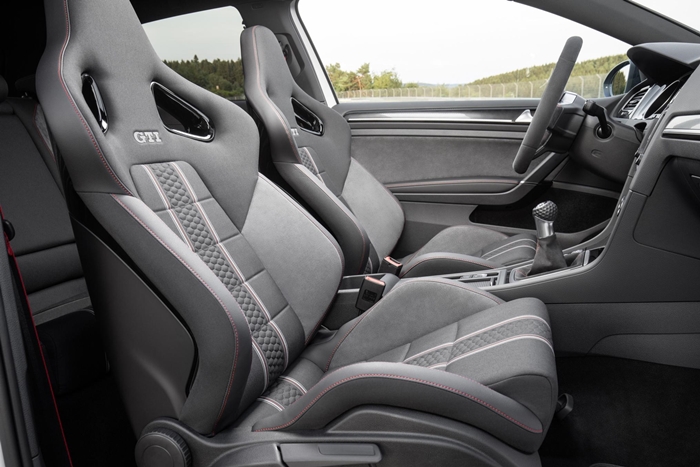 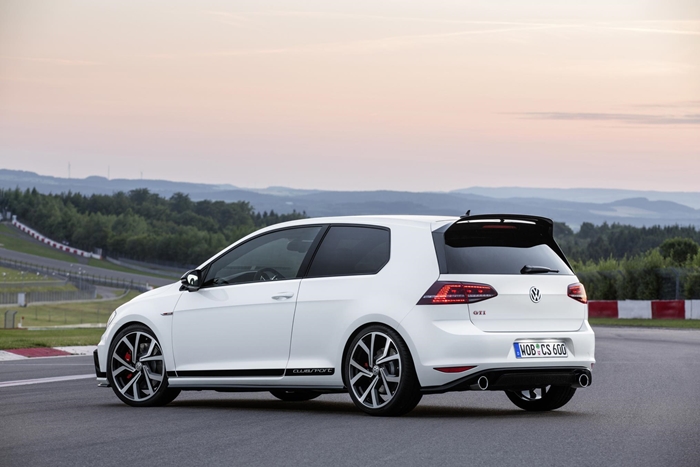 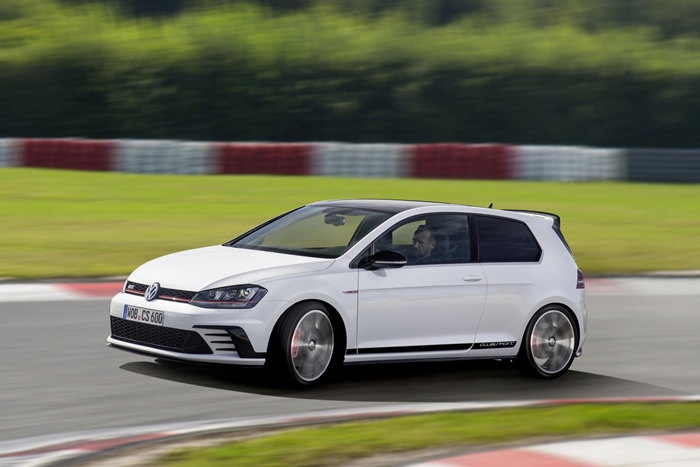